Highlights from Artist's Talk
Given at Berkeley Hall School
Sunday, May 16th 2004 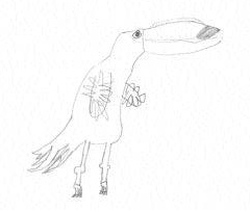 "Focus on Flight" began almost exactly two years ago. I was living in Michigan in the Detroit area and looking for opportunities to travel. I started researching artist residencies and became excited about a location in Brazil where I thought I could work with local children who were disadvantaged by socioeconomic difficulties. At the time I was working on a project to create a dialogue between my inner city art students and students in an independent suburban school where I also taught. The thoughts that kept coming to me for the residency involved creating an interdisciplinary curriculum designed around building an outdoor sculpture. My hope was that applying what I call "the basic food groups of thought" -- the arts, science, math, physical education, character education, and social skill development -- would elevate the children's experience in essentially tangible ways.

As it occurred on my own personal learning curve, it took a great deal more to carry out the project I was already working on, and I missed the deadline for submitting the residency proposal. This question kept coming to me though, "How could people in really down and out circumstances be lifted above their current situation to greater prosperity and development?" The answer came, "What could be more tangible than flight? Why not focus an interdisciplinary outdoor sculpture project with a fully integrated curriculum on flight?" So I continued researching and writing. I got to a point where some solid ideas were laid out, but I still had no place to build the project and no idea what to build. I was also working about four jobs at the time that mostly involved teaching. The school year was coming to a close and I felt a deep need to move to either the East or West coast.

I was able to take a trip to Boston for a special conference and then through a bit of serendipity, I landed in New York where I became acquainted with my web designer. I ran into so many old friends on that trip and was cared for in so many ways that my hopes for moving began to feel more possible. It was an experience of feeling a desire to expand my thought, taking a step, and then seeing the supply for that opportunity fall into place. I found, however, that if I didn't take a step -- even if no provision for the step was within view -- the result was that nothing would happen.

Following the same intuition that led me to Boston, I took a trip to visit my sister in Los Angeles. I again met up with old friends who were teaching at Berkeley Hall. During this time I continued to do research for "Focus On Flight" and also discovered that the 100th anniversary of flight was approaching. This gave me more impetus to pursue the project, which still had no location, no students with whom to work, and no funding. Not to mention that I was still at a loss for knowing how the ideas of flight I was researching would be manifested in an outdoor sculpture installation.

The after school program started in January of 2003. We began by studying the nature of form and function by linking the habitat, behavior, and foods of multiple species of wild birds with the shapes of their beaks, bodies, wings, legs, head, and tail, as well as their coloring. The students then worked on inventing new species of birds by democratically nominating and selecting different body parts. Then we wrote descriptions for how each bird lived, what it ate, where it lived, and in one case, how it cared for its young. I had four classes and each class created one bird.

That was the first semester. The next semester was dedicated to the outdoor sculpture project. I started with ideas related to kites and things that I hoped kids could make or at least embellish. It was also important to me for the sculpture to respond to the wind and air currents of the campus environment. Then the question formed in my thought, "How could we build something that would relate to or speak about contemporary air travel in passenger or commercial planes?" I had taken several trips back and forth to Michigan by that point, and it seemed to interest me that you might actually be able to capitalize on the frequent occurrence that people of different cultures and unique life experiences often get to sit next to each other on planes.

At the same time articles were beginning to be published about the Wright brothers and the history of flight. So I wrote a proposal for the Administrative Council of Berkeley Hall that described an outdoor installation of tall flexible poles that had different types of aircraft suspended from it. The students helped me build a 3-D model. I was extraordinarily grateful when these were approved, accompanied by praise for the birds we had invented. Our proposed location for the sculpture was also moved to a more central part of the school campus. It was decided that three aircraft would be built because I had three classes of students with which to work. While four birds maximized my energies during the first semester, three planes and a main structure were plenty to keep me going during the subsequent semesters.

Each class of students unanimously chose the type of aircraft they wanted to build. The students who worked on the airplane originally invented games commercial passengers could play that would invoke a feeling of common ground between them. All of the students studied the Wright brothers, Amelia Earhart, Charles Lindbergh, and other well-known pioneers in aviation because of their accomplishments, but also because of their character qualities.

As I studied the Wright brothers in particular, I was moved by their patience, courage, tenacity, humility, and childlike curiosity. I discovered that while their father had been a minister, their mother was a mathematician and someone who liked to tinker herself. An article in the April 2003 issue of Smithsonian magazine describes in detail the precision and carefulness the Wrights used in testing and building their gliders. Also significant to me was the way they constructed the gliders so that they would be protected throughout the impact of a crash, which occurred frequently. Within the movement of discovering flight in human history, it was only decided just a short while before the Wright brothers set to work on the problem, that one could achieve controlled, powered, flight with a machine whose wings remained in one position. Previously, many flying machines included flapping wings. It also seems unscientific to us now that hundreds of people died by strapping wings to their bodies and jumping off a summit of some kind. The gliders the Wrights designed were made in such a way that the joints would flex instead of break on impact and the pilots were protected within the structure. Wilbur Wright also said, "While the high flights were more spectacular, the low ones were fully as valuable for training practices . . . . Skill comes by the constant repetition of familiar feats rather than by a few overbold attempts at feats for which the performer is yet poorly prepared. A thousand glides is equivalent to about four hours of steady practice . . . far too little to give anyone a complete mastery of flying."

As an art student, I was challenged to be a risk-taker, and sometimes it seemed to be at great cost. The point that the Wrights demonstrated, from my perspective, is that a pioneer can have a pursuit wherein risks may be involved, but the dangers do not have to supersede the goal that is laid out.

Lastly, I would like to explain a little bit about [the third aircraft we made] the helicopter. Of the many different things I studied about helicopters, I was primarily attracted to the use of this aircraft as a vehicle for rescue. I came across a recording of a talk given by Beck Weathers, a survivor of a major 1996 storm on Mount Everest not too long ago. In his recollection of events, he discussed the conditions of the mountain and his struggle to survive, as well as his rescue by helicopter at what was thought to be an inconceivable altitude for this aircraft. In his talk, Weathers described the significant amount of courage the pilot expressed in flying at an altitude where the air was ultimately too thin to support a helicopter and with only ten minutes of fuel to burn. After listening to this story, the helicopter came to be -- for me -- a vessel that defined courage, which innately means "to have heart." I wanted to capture a feeling of being scooped up by a vehicle of great heart that would companion a bridge between immanent danger and safety. If you get a chance to look closely at the construction of the front opening of the helicopter, the bamboo there is woven with a hemp thread and there is a blanket of burlap to further a sense of nest-like safety.

To conclude, I'd like to recap the significance of the three aircraft. The airplane was formed by our inspiration to invent fun games that would cultivate common ground among diverse passengers. The Wright glider inspired us by fostering the concept that pioneering efforts can involve protection of the inventor, and the helicopter represents an instrument of courage to give care and rescue where it is most needed.